Why I'm Excited for a Correction: Part 2

Who Are the Predators and the Prey?

In the previous article, “Why I’m Excited For a Correction,” I discussed the events that will unfold as the commercial real estate theatre corrects, now let’s delve into the actors in this production and how Darwinistic attrition will shrink the cast. For the tactically prepared, this will mean be an epic Odyssey in search of treasure, and for others, it will be a Greek Tragedy that could financially reverberate the rest of their lives. I will show how to identify and neutralize the bad actors because in a correction, the watering hole will tighten and the theatre will become tumultuous and combative.  People treat deals and accounts with more barbarous when it means making their mortgage payment, paying their golf club dues or their kids’ private school tuition.

Please watch this video showing some of the characters in this play:

It was just happenstance and possibly fortuitous that I had written this article months ago, but we scheduled this article the same week as the “Lion King” release. The writer’s guild in Hollywood did a great job of instilling avarice, acrimony, guile and malevolence into their characters. The Tinsel Town wordsmiths know that they need to create an emotional bond with the moviegoer, and there’s no better to way to connect than with art imitating the environments where humans now hunt (and to thunderous mass appeal). This movie resonates with people because our instinctual responses are still primal, but they occur in more civilized climates.

In the storyline, Scar, the villainous male lion wrought with envy, schemes with hyenas to gain control over the pride. In cutthroat and Machiavellian business scenarios, diabolical plots are concocted and executed all the time. If you are unprepared or weak, you will be more likely to have your career fleeced, throat slit or get trampled on the career ladder.

Conversely, altruistic people do inhabit this ecosystem, and fortunately, their effect is more resounding than the scavengers. Office politics and friendships which look jovial and affable on social media internally will look more like the first scene in the Hunger Games (I will compare the LinkedIn dynamics to the Hunger Games in a future article).

Because we no longer have open tribal warfare (which did occur in our relatively short human history), many think society is more civilized (I don’t), and that less aggressive and devious underlying instinctual characteristics have been suppressed by our enlightened growth as a progressive society.

Nothing has changed, if you step outside your bubble, people’s primal nature is inherent, but cloaked with the mask they want you to see. I typically don’t view people from a prism of uniformity, but for brevity’s sake, I believe that there will be four species influencing the ecosystem when the commercial real estate watering hole dries up.

As the weakest on the chain, they always need to be circumspect within their competitive environment. In this theatre, their demise will come from desiccation, not from lethal canine incisions. They will be weeded out of commercial real estate because the watering hole is synonymous to the existing lucrative business accounts/pool of transactional money in your given trade at that snapshot in time.

Aside from human essentials (water, food, shelter, fire), money is what is required to survive in a modern civilized society, where the disparity between your office politics and the African Serengeti is not as transparent as you think. As the drought intensifies (heat, stagnation, deal fatigue) and the financial water has sloooooooooowed to a meticulous, but intermittent drip, you will need to:

If you are happy in your career, read on. Looking for a career change (men only)? Watch the video below (less than three minutes) for a great potential alternative career path (If you think you have extreme ambition and the right stuff):

Hyenas are scavengers wrought with avarice and appear in large clans* during a booming market. They take credit for ideas that are not their own, land accounts through a subordinate’s effort and boast ambiguous company accolades. These conniving creatures typically have no track record of recent or actual accomplishments and executed strategies when you peel back the onion.

The hyena isn’t much different from their domesticated scion, our ordinary, lovable, domesticated dog. They gobble up easy and transactional money, typically from other people’s efforts or inside relationships, like a goldish-black German shepherd sitting intently next to a two-year-old in a high chair, wearing an Elmo bib with a Spider Man sippy cup, lapping up mashed potatoes and Vienna sausages.

They are the most prominent players out there and are a rare species. They are the rocks of our industry, always reliable in reputation and business practices. The elephant is experienced, typically older, and treat their reputation like gold. They forge their insight from years of negotiation battles and deal foraging. They are not as agile or technologically enlightened as their younger counterparts, but nobody will knock them down. They have entrenched networks, a proven track record and wield behemoth influence in multiple circles. Elephants recite stories and bequeath lessons from years of experience, accomplishments and mistakes.

They are at the top of the food chain and are reliable in terms of ethics, knowledge of the kill terrain and execution. Their movements are always under scrutiny requiring them to move in silence until it’s time to execute their tactical kill strategy. The leader of the pride has an immense responsibility to oversee a tactical team of feline assassins. A lion’s leadership decisions are always bold, timely and never weak or uncompromising. They always show strength and operate in small agile teams. They are hunting not just for themselves but for their entire pride. Even though times are less primal and this what every entrepreneur should endeavor to be.

The always collusive, scheming and conspiratorial office hyena scrounges for the most amount of money for the least amount of work, especially true when the watering hole is drying up! If scavenging is the only way for a deceitful teammate or co-worker to survive, they will contrive manipulative schemes to marginalize your influence. They are weak, opportunistic and thrive off of your productivity. Learn how to identify these toxic canines/personalities and avoid getting entangled in their devious modus operandi.

real-world example from a friend from another city:

There was a company looking to expand multiple locations in my colleague’s (we will call her Jennifer) trade area/market, who was introduced to a new client, Don. They set a meeting giving her ample due diligence time to prepare and she identified over a dozen sites. She was summoned to a meeting and paid for own her flight/accommodations. When she arrived at the office, it looked like the previous tenant had just moved out. Random papers and knick-knacks were scattered across the 1970s brown maple “L” shaped desks that were noticeably uninhabited. In a small conference room with a circular table with chairs and three matching water-ring stains the circumference of a demitasse (miniature espresso cup).

In this retro-neglected room, she was informed she would be working with another brokerage firm (Master Brokerage Capacity) and sharing fees, which raised some red flags. The Principal of this firm, Matt, was also in attendance. Her intuition teemed that something was off. She reluctantly presented her sites, gave detailed explanations of their viability, and handed over the plugged-away hours of work that have an inherently static value—this is because time and real estate never stop moving.

The following Monday, Jen got an email from her new client that she had been fired from the account and her services we no longer needed. Thievery led to multiple deals for the other brokerage company (Jen had identified them), and one can only speculate on what sort of agreement those hyenas had with each other and though the amount was significant enough, it didn’t warrant the headaches or costs of litigation and the hyenas knew that.

As a self-aware person, what do you want your external perception to be? Think of this theory; let’s call it the method of relational co-dependency. All animals in the Kruger National Park ecosystem are co-dependent to some extent, but the strongest have the most flexibility, agility and freedom to operate. Deal predators can target and execute on the most lucrative projects with the least resistance—a lion has their choice of the wounded antelopes.

The hyena relies on the lion to hunt the stronger prey that he is not adept enough to kill. Do not be concerned with what the hyena is doing, because the lions and influential leaders do not worry about what detractors blather, imply or insinuate.

When the water runs dry and a correction hits, the hyena is in the weakest position and will be isolated and destitute with the other scavengers. Nobody will come to their aid because the hyena’s reputation is that of a sycophant. Think of ways you are vulnerable and prepare against this. We will address preparation, marginalization strategies and neutralization techniques in the final article.

If you want to be a lion, venture to get to know an elephant, the elephant’s years and wisdom will be a reliable and consistent source of knowledge and insight. The elephant also needs the lion if another pride comes into the ecosystem (external threats), to keep herself** attuned to her environment and protect her parade***. In these situations, share ideas with the pillars of your community and bring them small gifts to show your gratitude and humility.

If you understand technology, social media, or industry intel, and they don’t grasp it as much as you, I encourage you to share your expertise as a small gesture. I will guarantee that if you start bestowing selfless gestures and small gifts, those efforts will come back positively someday, probably when you least expect it and possibly when you need it the most — remember, elephants have long memories.

*Clan: The zoologically accepted term for a pack of hyenas.

**Did that surprise you? Did you assume the giant Elephant symbol of strength was male? In digital Serengeti, I already know some female elephants. Some of you might have even assumed that the lion was a male! If you thought that—male lions have manes!

***The zoologically accepted term for a pack of elephants.

Special thanks in this article to Justin Greider at JLL, Dwight Bain at The Lifeworks Group and Tara Tedrow at Lowndes Law for for helping with this article. Justin always gives candid advice, has a dreamy smile and a face that was made for podcasts! Dwight is still my advocate and Devil’s Advocate, and I so appreciate him mentoring me in the identification of toxicity! Thanks to Tara for her lioness perspective on the antelopes and excited about future hunting ventures. 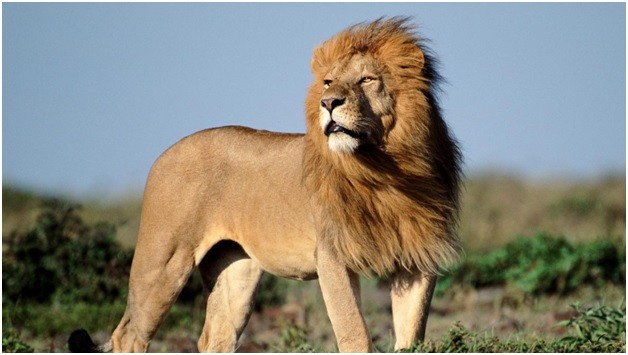